Often, the words “prototype” and “minimum viable product” are used interchangeably. But these are two very different parts of the development process. Understanding the difference is key for the success of your project.

Prototypes and Minimum Viable Products are often aimed at different audiences. And they have different processes behind their creation. 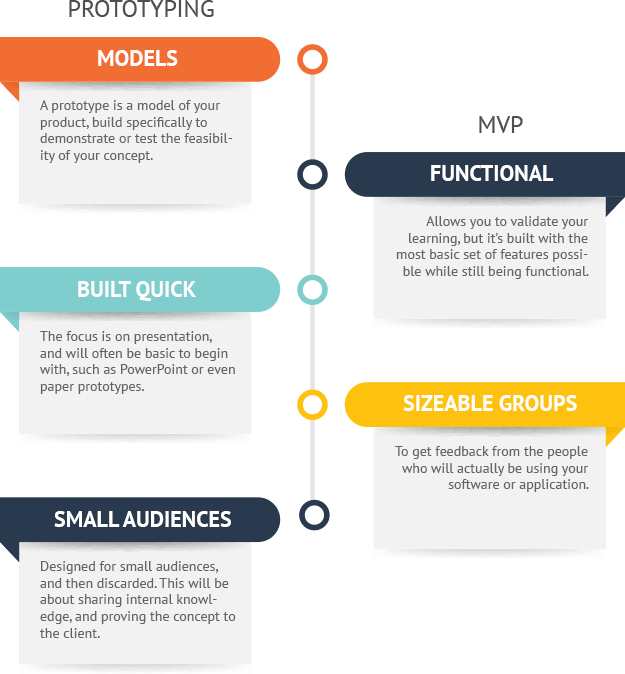 A prototype is a model of your product, build specifically to demonstrate or test the feasibility of your concept. Prototyping allows you to get a better understanding of the problems you’ll face during the development process. This means you can experiment to see what works.

The whole point of prototyping is to quickly prove or disprove a planned solution’s viability. The focus is on presentation, and will often be basic to begin with, such as PowerPoint or even paper prototypes.

Later on in the process, prototypes are often interactive, but only when this is necessary to communicate the navigation and design of the product.

Prototypes are designed for small audiences

Prototypes are usually designed for small audiences, and then discarded. Remember, the idea behind prototyping is to determine whether the idea can go somewhere, and what needs to be changed in order for it to be successful.

As each prototype is completed, new ideas are triggered, and it’s much easier to confirm the direction you’ll take with development.

Early on in the process, this will be about sharing internal knowledge among the team, and also proving the concept to the client. Latter prototypes are often shared with stakeholders and investors to demonstrate the feasibility.

An MVP also allows you to validate your learning, but it’s built with the most basic set of features possible while still being functional. This means it can be deployed into production. An example is the first version of a software that is ready to be released to customers.

MVPs are released to sizeable groups

The purpose of an MVP is to get feedback from the people who will actually be using your software or application. This means that you can see how customers or employees react to your product before you spend resources and time developing something they may not want or need.

For this reason, they’re usually released to larger audiences than prototypes (e.g. through a trial) so you can collect market data and user feedback. Once these users have experienced everything the MVP has to offer, you can use their feedback to guide future product development.

One of the biggest differences between prototypes and MVPs? Their respective end results. Once a prototype has accomplished its task, it’s no longer useful and is discarded. An MPV, on the other hand, is essentially the first version of your product, meaning its usability is just starting.

Any successful product development will include both prototypes and minimum viable products during the process. Early on, prototypes will demonstrate an idea and show how a product will be developed. You’ll discover errors early on, saving money in the long run.

Once the final prototype has been signed off, and all teams are set to go ahead, it’s time to develop an MVP. This can be once you can establish your users’ pain points and see what resonates with customers.

Finally, when the MVP has provided enough information for the final product to be developed, it’s time to commercialise or head to market.

Hopefully, this list has contributed to your understanding of the differences between software prototyping and a minimum viable product. If you’d like to learn more, or would like to talk about your next project, get in touch today.