NEED TO SCALE YOUR BUSINESS FAST? Here’s how prototyping will save you time in the long run

Globalisation and the internet have combined to render almost every business more vulnerable to greater competition than ever before. Innovation needs to be a key part of your company culture. That means onboarding the right people at the right time, encouraging a diversity of thought, and developing cutting-edge products and solutions.

Being able to define what your customers or clients want can be the biggest hindrance or opportunity to innovation. As the famous quote by Henry Ford goes “If I had asked people what they wanted, they would have said faster horses.”

The good news? Advances in technology have given us more opportunities than ever to “fail fast.” No longer do business owners need to go to market with a product that may not be perfect for their target audience. Instead, they can get the failure over with in the early stages of development, and create a product that’s much more likely to succeed.

It can be easy to see how prototyping can save you time in the short term. Your team members will have access to the same prototype and can see and interact with a mock up. That means there are fewer questions about key ideas and back-and-forth emails are reduced.

The same goes for your interactions with developers- they provide you with a prototype, you give your feedback, and changes are implemented. This smooth, streamlined approach is one of the reasons why prototyping is a great way to get your project off the ground.

But prototyping can also save you time in the long run. Here’s how: 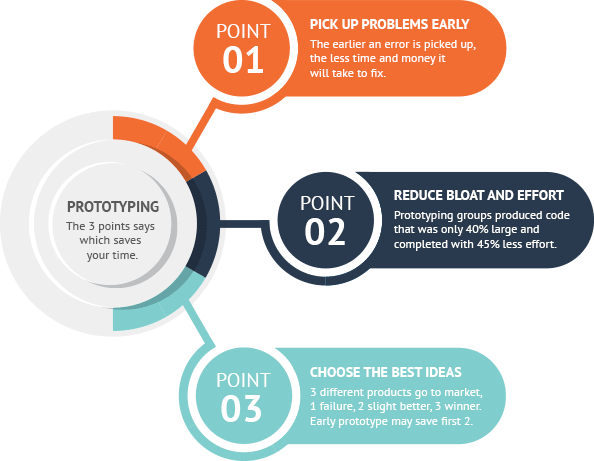 One of the biggest challenges when developing a product? Getting it right. If problems haven’t been picked up during the early stages, it’s usually hugely time-consuming to correct mistakes later during the development process.

A report titled “Why Software Fails” found that fixing errors after development can cost up to 100 times more than fixing them before development. Another study found that fixing a defect during the production stage can take 15 hours, compared to fixing it in the coding stage, which can take just 5 hours

The earlier an error is picked up, the less time and money it will take to fix. With prototyping, problems are picked up and fixed early on in the process.

An experiment at UCLA demonstrates this perfectly. Some teams used prototypes during the development process, while others used conventional development methodologies.

The prototyping groups produced code that was only 40% as large as the conventional group. They also accomplished the task with 45% less effort.

Disregarding budget constraints, imagine how much time your team would have spent developing the first two options. Early prototypes and feedback could have immediately revealed the lack of viability of the first two products. And the third product could have gone to market months or even years earlier.

All businesses will experience failure as they grow. Getting that failure out of the way early on will clear the way and increase your chances for success. But failing fast doesn’t mean acting recklessly. There’s a difference between realising that an idea isn’t feasible early on, and crashing and burning when you release a product that shouldn’t have been released.

As you can see, prototyping saves you time in both the short and long-term. Using prototyping can greatly reduce your time-to-market, making you more competitive and increasing your ability to grow quickly.

Ready to get started on your next project? We can help you save time and money with prototyping. Get in touch to learn more.