When Thomas Edison was asked about his experience inventing the electric light, he replied “When one theory was discarded, I developed another at once. I realised very early that this was the only possible way for me to work out all the problems.”

Over the last few years, you’ve probably heard everyone- venture capitalists, entrepreneurs, authors, experts- say that you need to “fail fast.” If you’re aiming to get inevitable failure out of the way early on in the game, prototyping can be one of the best ways to do this. 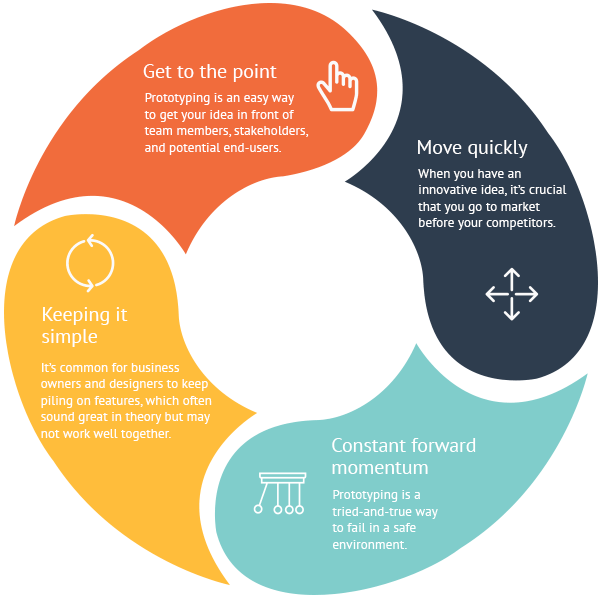 Digital development is expensive. When a project is successful, the ROI and profit quickly make up for the initial expense. But most businesses can’t afford to fail slow. If a project isn’t going to work, they need to immediately try a different approach before their budget runs out. Running out of money will often kill a project and eliminate your chances of quickly scaling your business.

Here’s how prototyping can help your business fail fast:

Step 1: Get to the point

Prototyping is an easy way to get your idea in front of team members, stakeholders, and potential end-users. By getting an idea out of your head and into a demonstrable format, you can eliminate misplaced assumptions and initial shortcomings.

Often, the prototyping process will begin with a pencil and piece of paper. Designers can easily communicate their ideas without needing specialised technical knowledge, allowing everyone involved to visualise how the end product would look.

When you have an innovative idea, it’s crucial that you go to market before your competitors. Time and time again, business owners are almost ready to launch their products, only to find that their competitors are a step ahead.

Without prototyping, you may also spend months working on a product, only to find numerous problems or issues during the final stages of development. And this can mean you need to go back to the drawing board. When you create prototypes, you spot these errors early on, so you can easily eliminate them and move on.

Prototyping is a tried-and-true way to fail in a safe environment. Each prototype is another step towards a new, improved version, and eventually, the final product.

As soon as each prototype is released, key decision makers can respond with feedback. This is taken into account for the next prototype, building forward momentum and ensuring that each iteration is a further step in the right direction.

It’s common for business owners and designers to keep piling on features, which often sound great in theory but may not work well together. Without prototyping, you may be deep into the development process before you realise that some of these features won’t work with your design constraints.

Prototyping forces you to prioritise only the best features, and you’ll know early on in the development process which ideas are the most likely to work. When prototypes fail, you can easily pivot and move on- without stalling your progress or wasting key resources.

These days, failure is seen as a badge of honour. Very few great ideas occurred without some degree of failure, and prototyping can help you get this failure out of the way early on, so your project will be a success.

Want help learning to fail fast? We’d love to talk about your options. Give us a call or an email today.