WHAT IS FIDELITY IN PROTOTYPING?

If you’re concerned about completing your project on time and within budget, prototyping is the way to go. It’s important to choose a software development company that carefully considers the level of fidelity necessary, so you can get the most out of the prototyping process.

When we talk about fidelity, we’re referring to the amount of time and effort it takes to develop a prototype. The higher the fidelity, the more closely the prototype will resemble the final product, and the longer it will take to develop that prototype.

There are three types of fidelity: 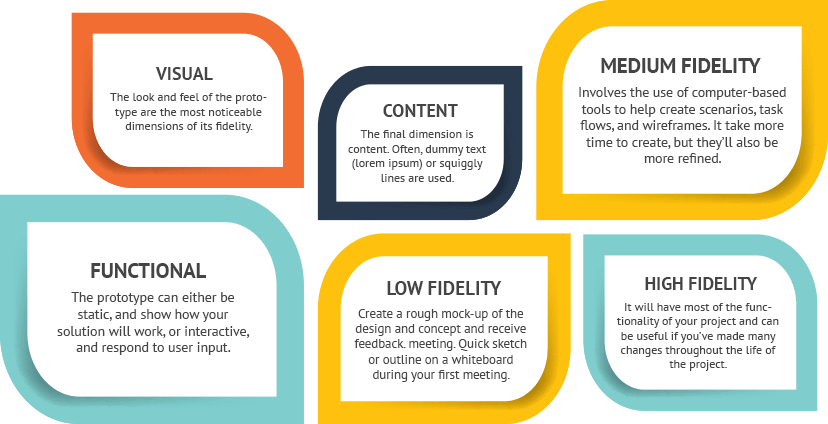 A prototype is a model of your product, build specifically to demonstrate or test the feasibility of your concept. Prototyping allows you to get a better understanding of the problems you’ll face during the development process. This means you can experiment to see what works.

The look and feel of the prototype are the most noticeable dimensions of its fidelity. If the developers go too hi-fi early on, users will often focus more on the visual design, which shouldn’t happen until the final stages.
Prototypes should be proportional. As more prototypes are created through the process, the visual fidelity can be increased to introduce elements like graphics, branding, colour, and style.

The prototype can either be static, and show how your solution will work, or interactive, and respond to user input. The more functional it is, the better idea you’ll have of how the final product will behave.

It doesn’t make sense to make the first prototype fully functional, since the initial design may not be what you’re looking for. Instead, interactivity should be added to each iteration to keep the project moving forward.

The final dimension is content. Often, dummy text (lorem ipsum) or squiggly lines are used in early prototypes. This makes sense, since content is usually created after the project is completed when you’re creating a new app or piece of software.

As the prototypes are refined and the project continues, you may decide to replace this dummy content with your actual content. This allows you to see how the content will impact the overall design of the project.

Along with these types of fidelity, there is also a fidelity spectrum which should be considered:

This is the quickest, easiest prototype. This will usually be used during the earliest stages of your project, so your developers can create a rough mock-up of the design and concept and receive feedback. Often, this will involve a quick sketch or outline on a whiteboard during your first meeting.

Medium fidelity often involves the use of computer-based tools to help create scenarios, task flows, and wireframes. These prototypes will take more time to create, but they’ll also be more refined.

Visual elements such as style, colours, and branding can be introduced, but the main focus should be on how the project will behave. Some developers may simulate interactivity by linking certain screens or pages. The purpose of this prototype is to determine whether it will meet user needs, and if it will meet expectations for user experience.

These are the most realistic types of prototypes, and can even be mistaken for your final project. However, they also take the most time to create. A high fidelity prototype will have most of the functionality of your project and can be useful if you’ve made many changes throughout the life of the project.

When you and your developers choose the fidelity of your prototypes which accurately reproduces the desired results, you’ll need to consider a few different things. These include:

Before you begin your project, speak with your developers about the level of fidelity they usually offer while prototyping. Often, they’ll have a proven prototyping process and will be able to explain why this is the best choice based on your project, budget, and time constraints.

Want to talk about your next project? We can help. Get in touch today to learn more.