Both prototyping and traditional development have pros and cons. It’s important to have a firm grasp of the difference and benefits of each before you make your decision.

Prototyping involves designers and developers building models of your product. These can range from a pencil-and-paper drawing to an interactive wireframe.

Here’s the difference between both approaches : 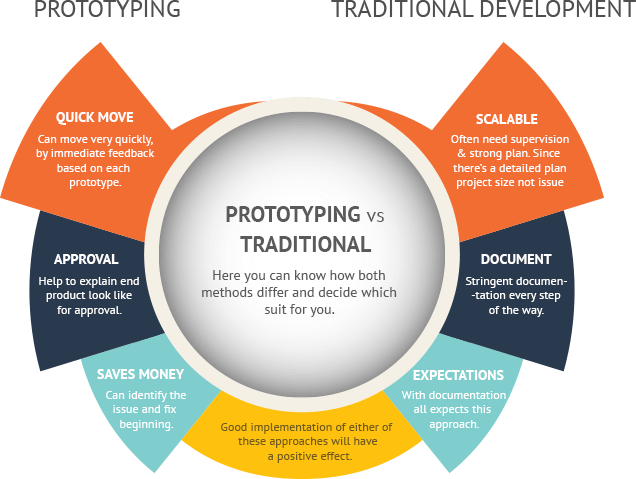 With prototyping process, the idea is to see if a product will be viable. Once this is determined, each subsequent prototype will be used to gain feedback. This process can move very quickly, particularly if you and your teams can provide immediate feedback based on each prototype.

Humans are visual creatures. It can be difficult to explain a concept to shareholders and investors without pages of written information for any product development. Prototypes allow you to quickly get buy-in since decision-makers can see what the final product will look like and how it will be used.

Benefits of Prototyping allow you to see where you may have problems with your design during the beginning stages. You can also determine which features are necessary, and adjust accordingly with high level analysis.

It’s much more cost-effective to use prototypes to fix issues as they arise than to wait until development is underway.

You may find that your team members or stakeholders are surprised at the end when the product quality doesn’t look or act exactly like the prototype. It’s important to keep in mind that prototypes are about getting as close as possible with limited functionality to get an idea across. They’re representations- not the real thing that’s the disadvantages of prototyping.

While this is great news for the finished result, prototyping requires you to be responsive and provide constant feedback. After each prototype, you’ll need to explain what’s working and what’s not.

With traditional development, project requirements are clearly defined at the beginning of the process. And frequent changes are not common or expected.

This is a rational approach. It assumes that processes can be optimised, problems can be well-defined, and results can be well predicted. It also involves extensive up-front planning so that variations in the development life cycle can be measured and controlled.

One of the big advantages of traditional development? Scalability. Mission critical and large projects often need close supervision and a strong plan for the long term period. Since there is a detailed strategic planning for the end project before any development starts, project size is not an issue.

Traditional development provides stringent documentation every step of the way. Each step is reviewed throughout the process.

Traditional development is exactly that: Traditional. Since this is still one of the most widely used processes, you may find that stakeholders and more traditionally-inclined team members expect to see a traditional approach- with the documentation that comes with it.

Can lead to budget blowout

It’s nice to imagine that you’ll have all of your project specifications and goals set in stone before development begins. But this is unlikely. Unfortunately, it’s much more time-consuming and expensive to make changes mid-way through the process with traditional development.

With this prototyping model, you’re constantly in the loop and can suggest improvements while reviewing each prototype. This makes it easy to make changes and increases the chances that you’ll be very happy with the end product.

Traditional development doesn’t have the same level of customer involvement, which can lead to issues once the project is delivered if the development firm has not placed an emphasis on communication.

For many businesses, prototyping will give the best results due to early user feedback and the ability to find problems at the beginning stages of the planning process. However, there is also a time and a place for traditional development as well.

Software development companies can use any tool or technique poorly or effectively. Your choice will depend on the goals and constraints of your project, along with your budget, deadlines, and stakeholders.

Want to learn more about how the development process would work for your project? Get in touch today with our project manager.