WILL YOUR FUTURE EMPLOYEES BE ROBOTS?

We all know that robots are slowly taking humans’ jobs. And while some countries are embracing automation and artificial intelligence, Australia is beginning to fall behind the pack. 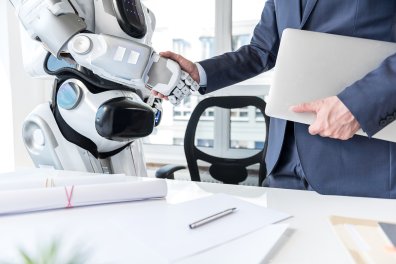 In the United States, some of the biggest companies are investing heavily in automation. Giants like Facebook, Amazon, Tesla, and Google are investing billions of dollars with the aim of replacing many human tasks with computers.

Japan has a shrinking population and an aversion to immigration. This makes it likely to be the first country to openly embrace robots in the workplace and home. Not to mention, two-thirds of the Middle East are willing to use robots to replace human doctors.

In comparison, Australia has been relatively slow to welcome robots and AI. A survey of business leaders in India, Germany, China, France, The United Kingdom, the United States, and Australia revealed some interesting information. Out of all of these countries, Australia is least likely to have plans for artificial intelligence implementation. While 100% of the Chinese business leaders surveyed had active plans to deploy AI, just 20% of the Australian business leaders could say the same.

The robots are coming

Like it or not, automation is inevitable. And businesses that embrace the change will be the ones that thrive in the future.

Robotics promises to be the most disruptive technological shift we’ve seen since the industrial revolution. Some industries have been utilising robots for years now, such as the manufacturing and automative sectors. But many experts are now predicting that robotic deployments are imminent, and we’re not ready.

Fastbrick Robotics, an Australian company, has developed a robot called the Hadrian X, which can lay 1,000 bricks in just one hour. The same task would require two human bricklayers working for almost an entire workday or longer to complete.

DeLavel International, a Swedish agricultural equipment manufacturer has built cow-milking robots, which will soon be working in Michigan. Cows are able to come and go, and choose when they’re milked on their own.

Hilton Hotels has introduced Connie, a robot concierge powered by IBM’s Watson. Guests can receive information about the hotel and ask questions about nearby tourist attractions and restaurants.

AI and robotics are huge opportunities for mankind. They’ll reshape how we create wealth, and what it means to work. Right now, much of the technology is about taking huge amounts of information and using it to make informed decisions.

One example is the banking industry, which can use AI to decide whether an individual should receive a loan based on company-wide repayment histories.

This is the type of technology that we’re seeing in almost every industry. As it spreads, it will eliminate jobs like telemarketers, paralegals, radiologists, bank tellers, bond and stock traders, and customer service representatives.

Many people are concerned about the impact of robots on their jobs. However, it is possible for the transition to be successful, as long as businesses and governments see the writing on the wall and are prepared for the coming job losses.

Schools are already focusing more heavily on STEM subjects (science, technology, engineering, and maths). And there’s little doubt that the world will continue to need workers experienced in programming, coding, and AI.

The fact is, robots are able to replace jobs that humans find boring and repetitive. Robots are excellent at doing the same action over and over and using logic to make decisions. But they can’t do tasks that require planning or creativity, or anything requiring “people skills”, or human interaction.

People in the industries that are going to be impacted will need to be reeducated or retrained so they can perform tasks that robots can’t yet do. In the long-term, this means that humans will be doing more highly-skilled and meaningful work.

One solution is a universal basic income, which would be government funded. Funding could come from a variety of sources, including carbon taxes, VAT, earnings from investments, income taxes, resource-based revenues, and decreases in military spending. This would eliminate households living below the poverty line, and provide a safety net to allow retraining for those who are made redundant by robots.

Trial projects for a universal basic income are already underway in France, Finland, Switzerland, India, Kenya, and The Netherlands.

The key takeaway? The robots are coming, but this is an amazing opportunity. We’ll have more time on our hands than we’ve ever had before, which will allow us to work on tasks that truly make us happy. If the transition is managed well, we’ll enjoy a better lifestyle, more leisure time, and a higher quality of life.