Just like with an old car that continually needs repairs and maintenance, eventually it’s worth replacing it instead of continuing to throw money at it.

Along with being old and clunky, there are a number of risks associated with keeping legacy software systems running well past their used-by date.

Here are 5 ways to determine whether your legacy software system is at risk: 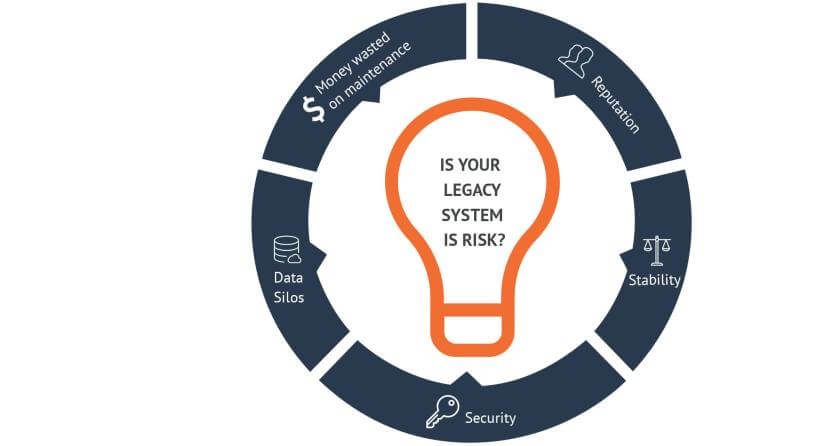 One of the biggest considerations is the money you may be wasting on maintenance for your legacy system. In the United States, for example, the federal government is currently spending approximately $35 billion every year simply maintaining legacy applications.

There are a few reasons why maintaining your legacy software is so expensive. First, it often requires that you use antiquated hardware, which is also much more expensive compared to modern hardware.

It’s also much more time-consuming, and as anyone who runs a business knows, time is money. Most of the time, legacy applications were built without modularity. This means that parts of application logic couldn’t be reused or shared. Modern applications are much easier, since they rely on code sharing and often only a block of code will need to be altered to make a substantial change.

Another important factor? As your legacy software ages, the talent pool able to work on it continues to shrink. This software requires a skillset which begins to be faded out, and as fewer people have this skillset, there’s less competition and the costs continue to rise.

Eventually, your vendor will also stop supporting your software. That means that if something goes wrong, you can’t count on your vendor to help, and as the employees who understand the system leave and retire, seemingly simple problems can blow up into huge disasters if no one knows how to fix them.

Programming languages and methods have continued to evolve over time, with the rise of open standards allowing different software to integrate across different platforms.

One of the biggest issues with legacy systems is that they don’t have these open standards- meaning they won’t integrate easily (or at all) with other software. As your business grows and adopts other software, you risk creating data silos within your company. This slows down your business and limits your capabilities.

Although legacy platforms are robust and stable, they’re often impossible to integrate, which means that the data is locked in them and inaccessible to other parts of your business. As industries are continually disrupted by startups, established companies need to be able to move quickly and innovate in order to keep up. Legacy systems simply don’t allow for quick innovation and tend to make IT projects much more complex. It’s also hugely difficult to scale legacy systems and integrate them into cloud solutions.

Before the internet, and before you could sell private data online, writing software was simply a matter of coding the functionality required as efficiently as possible. Those days are gone, but the legacy software written during this time is still being used today, and running critical infrastructure in the energy, medical, and financial industries.

Hackers are easily able to get their hands on default passwords and once they have these passwords and network access, they can log into your system- usually with administration privileges. Legacy systems often have backdoors with access to key databases, some supplied by the vendor and some hard-coded into configuration files or the software. If they’re hard-coded, most people won’t even know they exist, and if they’re being used, no one will know where they came from, presenting significant problems for businesses.

One of the reasons why so many companies are still using legacy systems and applications is stability- they “just work” even if no one really knows how. The problem? These systems become convoluted over years of use. As companies try to keep their systems running, they often add features to the front end of their systems, without updating the backend. They’ll also often use workarounds to ensure that features will work on their outdated systems.

It’s not hard to imagine how 10-20 years of patches, workarounds, fixes, and updates will be impacting your systems. And after a while, no one really knows how everything works together- a change to one part may break something somewhere else, and while the system may be running just fine, it’s basically a ticking time bomb that could go down at any time.

While your legacy software may have performed well for years, eventually your customers may start to go elsewhere. Response times may regularly fall to unacceptable levels, you may not have enough bandwidth with servers unable to keep up with demands, and documents may continually be getting lost as employees search through off-site storage sites, file cabinets and network drives.
Customers are becoming increasingly tech savvy, and millennials grew up with tech at their fingertips. If your business seems to be behind the times and lags behind the competition when it comes to services like apps, text messages, email marketing, and more, it shows potential customers that you’re not interested in forming a relationship.

Is it time to take a good hard look at your legacy software system? Get in touch today to learn how we can help.